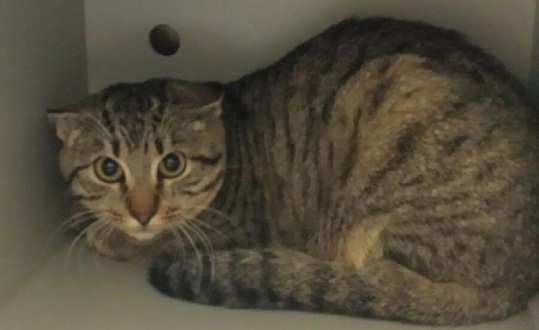 The silhouettes slink and scatter as soon as I get out of the truck. I approach the residence, one of more than a few I’ll have to visit on this dead end street not far from the center of town, and the familiar odor of marking urine gets stronger and stronger as I walk up the drive.  The overgrown bushes that line the front walk shake and tremble as something darts through the tight branches, then freezes hoping it hasn’t been seen, which it hasn’t. I step over the wet plastic bags of last weeks delivered and unread newspapers.  Oil coated paper plates with crumbs and smears are scattered on the front porch. I take a tiny can of cat food, peel off the top, crouch down and slide it into the empty humane box trap that I have been checking out at this house twice a day for a few days now.  Even though I personally laid eyes on at least eight cats of various ages and sizes when I walked up to this residence alone, I’ve only managed to catch two.  The surroundings confirm that despite my best effort to educate and encourage, and despite their insistence that they understand and want to help, the homeowner/cat feeder has still continued to offer food elsewhere, outside the trap, because she just can’t bear to see them not eating. These cats are doomed to a life that most animal lovers wouldn’t tolerate for their own pets; a life of living in sewers, carrying and succumbing to diseases, being hit by cars, abused by delinquents (usually of the adult kind), delivering sick kittens, enduring violent fights for territory and resources.  All at the hand of the same person who claims she is saving them.  Last year all the kittens we picked up here had Calicivirus.  I wonder what they’ll be carrying and sharing this year… 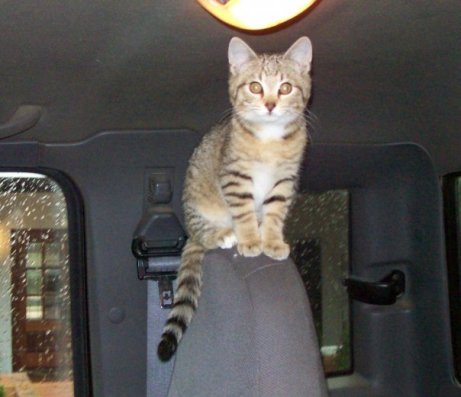 Tinker Toy, found hiding under a truck in South Carolina

Despite our best efforts, people will always insist on feeding stray cats.  I’m not talking about an organized and managed feral colony, a Trap, Neuter, Release program (TNR) that collects the animals, vaccinates and alters them to protect them from disease and eliminate breeding, then releases them in a predetermined designated area with caretakers who monitor them for illness, coordinate capture and vet care, provide appropriate shelter for seasonal difficulties, and work collectively with surrounding areas to control the population and ensure the animals remain healthy and happy. No, this is different. These are animal lovers who, although they swear by their devotion to the creature, refuse to provide any of the luxuries listed above.  Their generosity to these cats ends at a bag of cheap cat food and a dirty bowl. This small act of kindness, coupled with numerous huge acts of neglect, result in nothing more than the perpetuation of homelessness, illness, and suffering of these animals.  Giving the creature just enough to survive, but not enough to thrive. In most circles this would be regarded as cruelty.  But, for some reason it is socially acceptable with stray cats.

Rarely is there a neighborhood consensus on how a loose cat in the area should be handled.  The ratio of “poor thing, we should feed it” to “get the %#*@ off my porch”is very unbalanced in the majority of communities.  And for some reason it seems the one who decides to feed the cats is never the same homeowner that puts time and effort into the garden and landscaping that said cats consistently dig up and defecate in.  It’s interesting how that works. So eventually, someone has enough and complains.  And that’s where we come in. 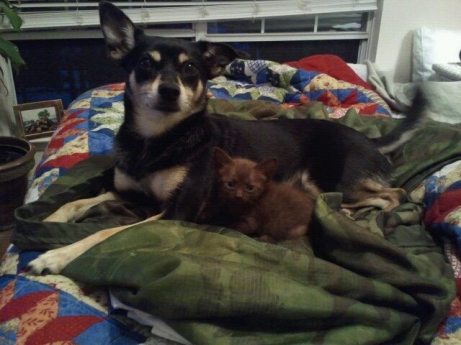 Missy and Cocoa, a kitten born to a trapped trailer park kitty

Some municipalities have strict ordinances about cats being allowed to roam, ownership determinations, and feeding stray animals.   Some actively work with well meaning citizens to develop and manage colonies, thereby reducing the number of feral intakes and euthanasias of unadoptable cats at their facilities. Some towns have ordinances in place but don’t bother to enforce them, they just trap and remove. Some cities ignore the whole thing altogether, which also reduces the number of feral intakes and euthanasias at their facilities.

Without appropriate intervention, eventually the numbers grow.  Litter after litter appears and matures, and if you work in a City that adopts the latter of the two approaches above, the window for domestication and essentially the salvation of these animals is extremely small.  If I can’t catch these cats before they hit 7-8 months, the odds of them being domesticated and adoptable is incredibly low.  Meaning if they are caught later on, usually by the fed up private citizens who aren’t doing the feeding, and there is no colony or active TNR program in place, most facilities will euthanize.  You cannot safely place an animal in a home that is violently terrified of people, and you can’t keep it in a cage for months trying to socialize it.  Sure, there are a few barn cat rescues in the area, but they only pull when they have space, and only take the ones that test clean for the diseases that many of these cats are already carrying at a young age. Tomcats makes great barn cats, for some reason toms are generally more welcoming of domestication as they age.  And even barn cat programs usually won’t take the ones that are truly truly feral.  Most people have never seen what a truly feral cat does when captured.  I’ve had raccoons that are safer to transport and easier to handle than a 15 month old feral cat. 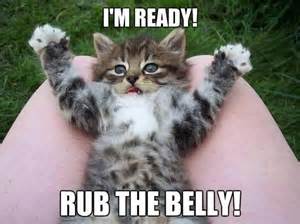 Go ahead, I dare you…

Socializing a feral or frightened cat is not for the weak of heart.  They put on quite a show, hissing and spitting and swatting, darting around the cage. It takes some true determination and raw nerve to stick your hand in there. Some are easy to read; I know you mean business, and won’t push it too much.  They get to be in the TNR program.  But once I determine that you’re bluffing, which most of the younger cats do, well I’ll have you purring within a few days.  Everyone has a different technique when it comes to socializing animals, and I work with some real pros.  But the key is, it takes everyone.  Numerous hands have to reach in and want to show that cat that it’s good to be loved and touched and held.  One cannot do it alone.  There isn’t much that is more discouraging than trying to socialize animals by yourself. At the same time, there isn’t much that is more rewarding than hearing that first purr when they finally realize they are safe and you make them happy.

Sometimes the endings aren’t so happy.  As I type this, a fellow officer hundreds of miles away in another state is currently tasked with trapping and euthanizing dozens of cats, unaltered and unvaccinated, that have been exposed to a rabid animal.  This makeshift colony of unkept stray animals, over 40 roaming cats being fed by the locals, have now become a public health hazard in the most dangerous sense of the word; rabies is an incurable neurological disease that incubates quietly until it explodes with a contagious fury, as it did with one of the queens that randomly attacked multiple people before being caught, humanely euthanized and testing positive for the virus.  Many of the other animals exposed to this cat are somewhat social, meaning they could potentially come into contact with people and children on a regular basis and could have already started spreading this deadly disease.  The effects of this irresponsibility are and will continue to be devastating to the ones forced to deal with the consequences; not only for the officers tasked with this precautionary euthanasia, but also the victims of the attack, spending upwards of $13,000 – $17,000 on life saving rabies post exposure vaccines. And the most heartbreaking part is it was all preventable.

When you truly care about animals, you want and do what is best for them, not just what is easiest for you.  The satisfaction felt when one places a bowl of kibble outside on the porch is minimal, and pales in comparison to the feeling of setting a trap and getting the animal vaccinated, altered, and into a loving and caring environment where it can thrive and not simply survive.  Be a part of the solution; there’s already enough that are part of the problem. It’s a team effort, and we need all the help we can get.